Kawasaki had acquired 49% of Bimota, and was in the process of developing a new Tesi H2 with hub-center steering and an off-the-shelf (no bad thing, in this instance) supercharged Kawasaki engine, there was a back-story our younger readers undoubtedly missed.

Motorcycle enthusiasts of a certain age (including … ahem, yours truly) remember Bimota as the wild child of motorcycle manufacturing, known for outrageous designs and engineering. The stunning CNC-machined billet parts, motor tuning and chassis lightening that turned production motorcycles into exotic superbikes.

Of course, time caught up with Bimota and production superbikes became too light, powerful and trick for a small concern like Bimota to significantly enhance. The role Bimota played in the industry ended. Enter Kawasaki. 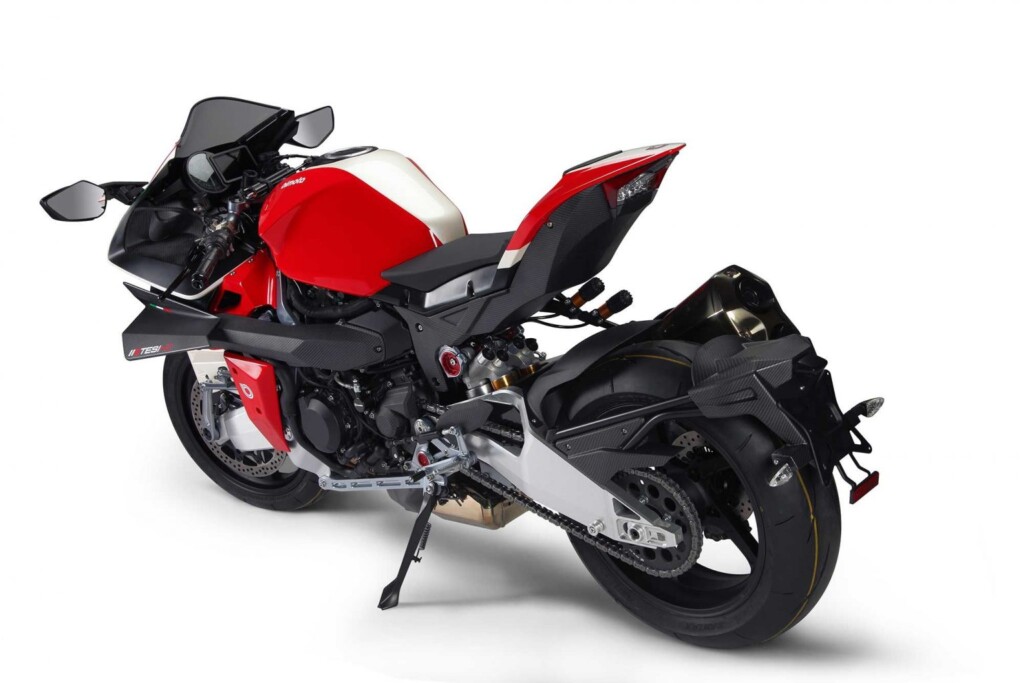 Is Kawasaki the wild child among modern motorcycle manufacturers? Who dared out-Hayabusa the Hayabusa with a ZX-14? Who put a supercharged 1,000cc inline-four into mass production and sold it to the public … without including a parachute? Well, that would be Kawasaki.

So this modern Kawasaki/Bimota relationship makes sense, in a way. With the combination of the most outrageous (again, not in a bad sense) engineering development of the Bimota brand, the hub-steering Tesi, with the equally outrageous Kawasaki supercharged powerplant from the H2, we now have a production motorcycle with final photos, specifications, and even pricing.

You can see production specifications for the Bimoto Tesi H2 here. 250 units are available for pre-order at roughly $75,000 U.S. (€64,000). For that, you get a rolling piece of art, that apparently rolls quite well.

231 horsepower and 104 pound/feet of torque motivate a claimed dry weight of 456 pounds. In addition to the unusual front end (the benefits of which are described quite well by Kevin Cameron), awesome Brembo brakes (including dual 330 mm front discs) are part of the package.

What do you think of this new Tesi? Did you drool over Bimota designs as a kid, just as I did? We’ll report on the performance of the new Bimota Tesi H2 once journalists get their hands on a production unit.